WE MISS YOU, DOUG!

WE MISS YOU, DOUG!

Doug Felt is all about playing music, whether at their festival 'Bag Lady' booth with wife Lee, or under the trees at a campground or onstage performing at a festival.  Doug very seldom misses a chance to play music on his mountain dulcimer, pennywhistle or bodhran (if the beat be right).  The Felt's have a fun but unique lifestyle.  Click here to learn more about them. 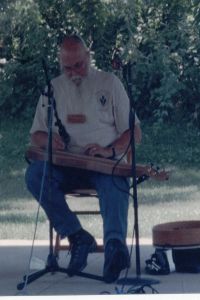 made his first dulcimer, a cardboard model, in 1982.  Custom made dulcimers soon followed and he has been playing ever since.  The penny whistle came a few years later and he received his first bodhran, as a gift, in 1992. He began teaching pennywhistle workshops in 1990, and presented his first bodhran workshop in 1994. He was the originator of the Pizza Box Bodhran workshops and is known sometimes as the instructor for the "Italian Bodhran".

In 1995 he gave his first fretted dulcimer workshop. He has taught mountain dulcimer, pennywhistle and bodhran workshops and has performed in Georgia, Illinois, Indiana, Michigan, Missouri, North Carolina, Ohio, Pennsylvania, West Virginia, Louisiana, Texas, Kentucky, Tennessee, Florida and Alabama.  He has enjoyed traveling across the country entertaining folks with his fretted dulcimer, penny whistle and his collection of small town stories.

Doug has put workshops behind him, but still enjoys some performing and storytelling. 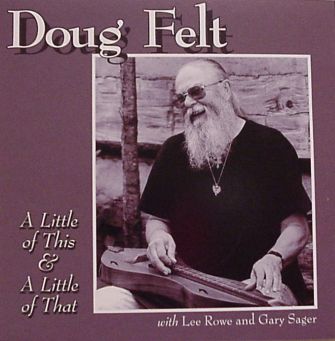 His first CD, "A Little of This and A Little of That", captures Doug's music beautifully as he plays his favorites.  A rousing dulcimer piece may be followed by a 'sweet' whistle tune.

Doug is joined by friends, Gary Sager and Lee Rowe on several pieces.  The CD is now available at festivals where the Ohio Bag Lady is vendoring or can be ordered from here.

This CD was produced, recorded, mixed and mastered by Stephen Seifert, Nashville, TN.

Doug's CD is available separately or as a set with the companion tablature book.

Click here for a complete order form including all of Thistledew Acres products.